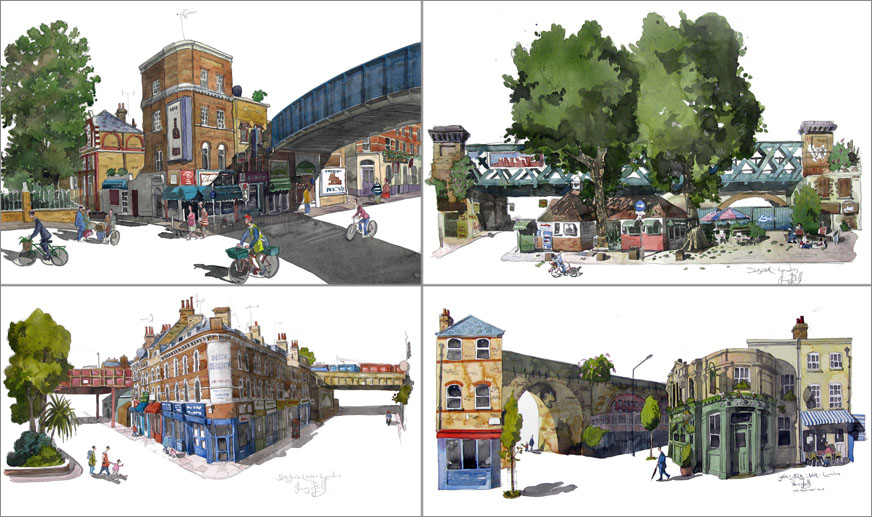 Painting railway bridges in London. Railway art is most enjoyable

Over the years, I have painted a few of these railway bridges in London, and thought I would put them together as a series. Despite their disruptive construction, I can’t help liking them. They are very ‘London’. Just a pity that many of the trains they support are rarely on time.

Getting into London from the suburbs

As London grows year on year, getting about has become a monumental undertaking. The population simply can’t walk to work anymore so they have to drive or take public transport.

The roads are clogged, the Tube works to a fashion, though to get workers in from the suburbs, the railways are the only real answer.

To achieve this railway, engineers were, and are given God like powers to deliver the railways into the centre of the capital. The needs of the many, far outweigh the needs of the few. In the outer parts of the capital, they domolish whole streets, and create great cuttings slicing through communities as they go. 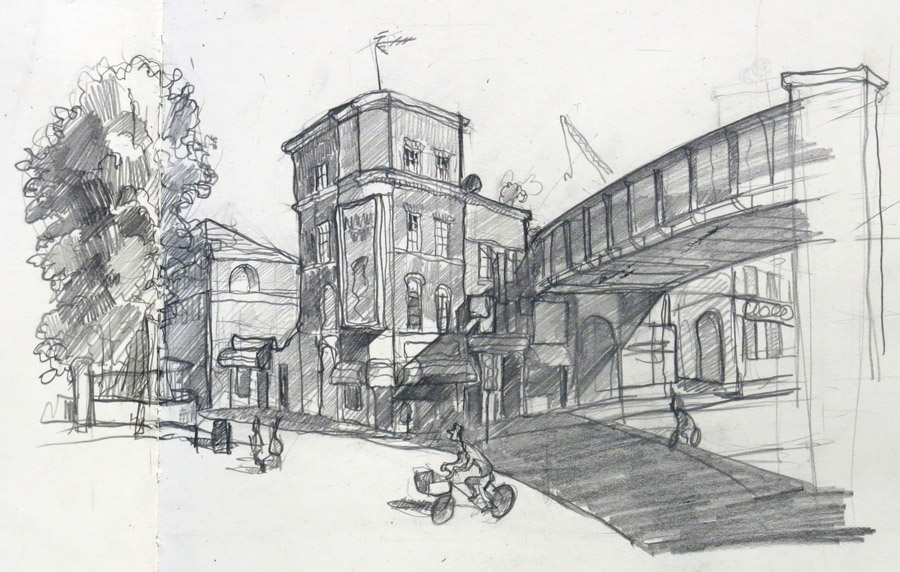 In Inner London, however, the problem tends to be solved by overhead railways. These weave about in all directions and often chop buildings clear in two to reach their stations. Below, they tend to be supported by arches which are rented out to be nightclubs, lock ups, or garages where you can purchase guns, drugs, pit bull terriers and even the odd car.

Why all these random bridges in London?

London unlike Paris, New York and St Petersburg was never really built to an overarching plan. There is, and never has been a strategy for the expansion of London. London is an opportunistic sprawl. It grows and dies with commerce and plague.

There have been attempts to streamline it all. After the great fire of 1666, grand plans were drawn up to create wide avenues and boulevards in the continental style, though the Londoner had other ideas, and simply set up shop again on top of the charred ruins of what they had before. Even today, the roads and streets are in the same place, and have the same names as they did prior to the fire. So much for grand plans!

London essentially is a bullish thug, and all that can be really done is to contain it here and there with city parks, and ring the whole lot with the M25. 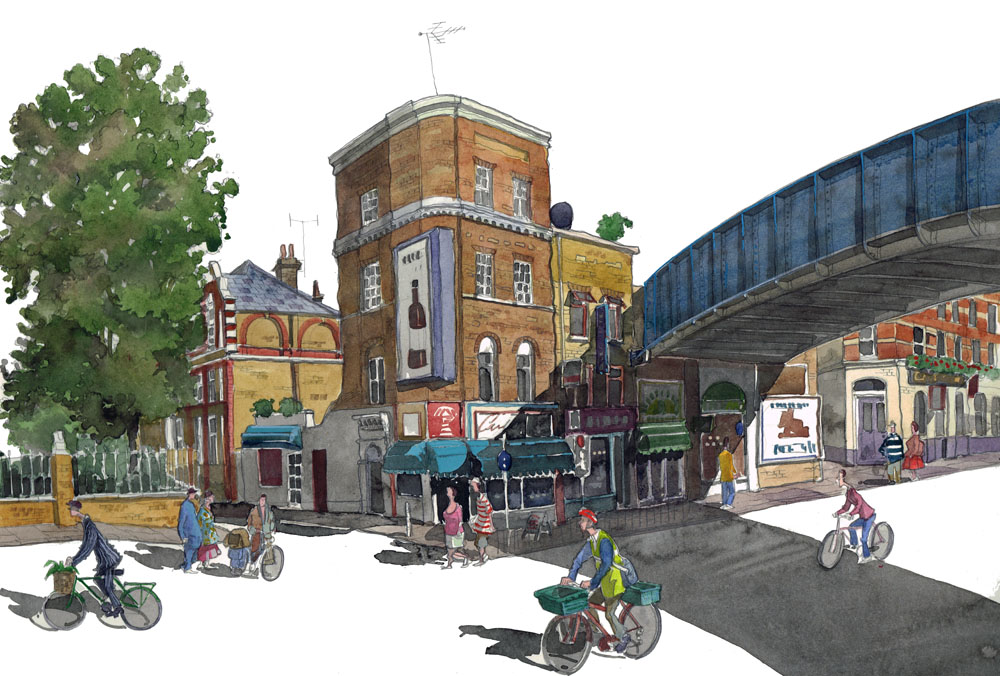 One afternoon I decided to do a painting of a view of Waterloo station. I have previously painted the large entrance on Waterloo Road and had it in my mind to do another view of the rather shabby exterior of the station.

I was on the north bank and made my way over the Thames over Waterloo Bridge towards the station. I was nearly there and I spotted this scene of this bridge crossing the road just next to St John’s Church.

I was really stuck by the harsh shadow across the road and it seemed to me that the railway engineers simply carved a brutal line through the map of London to mark where the line had to go regardless of who lived there.

This was done in the days of steam too so life in those upper rooms must have been pretty, noisy, suffocating, and short I shouldn’t wonder.

Painting a bridge in Dalston Lane

I used to live in Hackney in the East, and I was always admired this triangular junction near Hackney Downs train station with the railway bridge cutting through both roads at the far end. It is a proper East end scene and the hand painted signage makes it all the more enjoyable.

It was  tricky to paint, however, as I had to move about a very busy road junction while I worked. Hackney can be a tough area too, so every couple of minutes car drivers would bellow and hoot at each other for perceived transgressions. One even ended up in an on road fight. Everyone was blowing their horns then. Delaying a journey in London is a serious offence.

A painting of The White Hart, Southwark

Southwark is undergoing massive regeneration right now and much of it is a building site. It was in a building site that I came across this modest set of buildings on Great Suffolk Street which had somehow missed the developers wrecking ball.

The centre piece of the collection is The White Hart pub which I am told is under new management from when I was last there.

It is not easy to see from my painting though, that this small area serves as a crossing point for three railways. Two lines going South to North ending up in Blackfriars station. And one West to East from Waterloo going to god knows where. I was pleased to see the continuation of the small businesses residing beneath the arches too.

A painting of Southwark Bridge Road

A small but very active community resides beneath this wrought iron bridge in Southwark. I arrived in the early afternoon to paint this view.

I was really charmed by the tall London planetrees which form a sheltering canopy over the coffee shop below. It all sat in a pedestrian area of shops. This is the nearest thing South London could come to a piazza.
I spent the afternoon drawing and painting while chatting to the locals and drinking coffee.