Someone who has never visited Brick Lane Market before could be forgiven for thinking that ‘Brick Lane market’ was all there is, you will discover, however, a few scattered other market gems huddled in the surrounding streets and one of these is Bacon Street market.

I noticed it a few years back while painting Brick Lane, it is an intriguing little street and I had it in my mind to come back to it when I could. And earlier this year, the opportunity came up and I went over Bacon Street to give it a look, sketchbook in hand.

Although the area is a traditional place for new comers, the stall holders have been here for many generations, and if you look at the first quarter of the picture, you will see a portrait on the wall which is tribute to the late Charlie Burns, the self-styled ‘king of bacon street’. He was born here in 1915 and lived and worked around Bacon Street all his. Charlie Spent his last years sitting in his daughter’s car on Bacon Street passing the time of day with old friends and family. He died in 2012 aged 96.

His descendants are still working the market, and with a bit of investigation, they will stop and chat about the ‘old days’ when the phrase ‘city people’ meant something entirely different to what it does today.

One of the stall holders was minding his stall from across the street in the sun and leaning back on one of the chairs he was hoping to sell. It may appear risky him sitting there away from his stall with London running alive with shoplifters ready to pounce. Well, he had a very keen eye on him and he was massive too. I wouldn’t risk stealing a light bulb off of this man let alone one of his 70 kilo washing machines.

The Shops I imagine Bacon Street market was a whole lot bigger at one time, though it has been slowly nibbled away through time to what is now just a few old shops.

Two of the shops don’t even look like shops at all, they just look like small warehouses, the graffitied shutters shoved half way up at the beginning of the day’s trade, with the boxes of loo rolls and other brick-a-brack spilled into the road to attract a passing customer.

The other more traditional looking shops sell shoes, vintage goods, and you can even get yourself a tattoo. it has to be said however, much of what is sold is in the traditional way of a stall on the street. And all the better for it. 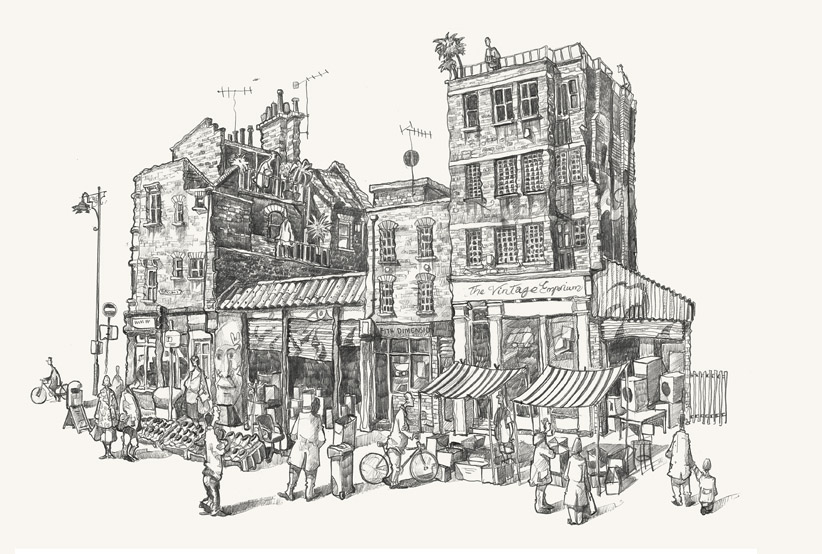 This framed drawing is available to buy here

The last of the buildings could have been an old Victorian textile factory and it still had a few of the ancient winches still poking out. I am not sure if anyone lives in there, it doesn’t look particularly inhabited though you never know in London, people will live anywhere. It does get a bit of use though, as the sunbathing stall holder mentioned that they often hold trendy parties on the roof for the local fashionistas as he stabbed a thick finger up to its ramparts. I am not convinced he approved of fashionistas.

It is here the market ends rather abruptly with a torn edge of brick. Clearly it continued at one time as on the side you can see the remnants of fire places hanging high on the wall and even the odd scrap of shabby wallpaper.

Opposite, all the way down you will find modern London, and this means modern flats and apartments, and being London it also means there are more on the way so the shrunken Bacon Street market is a mite surrounded.

All that said, its compactness rather suits it and it is well worth a visit. A tiny community with all its own traditional ways in amongst all the vast madness. And being a tiny bit mad itself. It is very ‘London’.