In between Christmas and New Year I took a freezing trip south of the river (always scary for a North Londoner) to the Dulwich Picture Gallery (DPG) to see the Norman Rockwell exhibition.

Although the DPG is tricky to get to and no doubt suffers as a consequence, it is an ideal space to show an exhibition of Rockwell, as once inside the gallery, you firstly have to pass through the gallery’s permanent exhibition of old masters. Here you are treated to what are clearly some of Rockwell’s key influences. The collection has some fine Rembrandts, A room featuring Poussin with all his theatre and a great personal treat for me, the mood gripping brush of Velasquez in the shape of a portrait of King Philip IV of Spain. Philip of the doomed Hapsburg dynasty which not long after disappeared down an interbreeding induced plug hole. All these and more are a fine introduction to Rockwell and well worth the trip on their own.

A bit about Norman
Norman Percevel Rockwell was born on February 3, 1894 in New York. As a child he showed huge early promise and enthusiasm as an illustrator and was working professionally by the time he was 18. His unique style was developed illustrating magazines and books. His first big break came in 1916 gaining a commission to illustrate the national Saturday Evening Post. He went on to regularly illustrate the Saturday Evening Post for an astonishing 47 years with 323 covers until 1963. The Ken Barlow of art! This body of work in the process, making him the most popular American illustrator of the 20th Century. Testament to this was Rockwell’s Breaking Home Ties which sold for $15.4 million at a 2006 Sotheby’s auction.

His style became so well known that it even had its own name ‘Rockwellian’. This being a ubiquitous view of America somewhere in between the Waltons and Little House on the Prairie with handfuls of Mom’s of apple pie jammed in between the gaps should any reality dare to peep through. This way of seeing is the essence of what has made Norman Rockwell loved and vilified in equal measure.

The Exhibition
There are 40 original paintings spanning the whole of Rockwell’s career placed in loose chronological order. Adding to this, along one long wall are copies of all 323 covers of the Saturday Evening Post. Whatever one may think of Rockwell, you cannot help but be impressed by such an extensive body of work and he clearly put everything he had into each one.

I had only seen copies of Rockwell’s paintings before now and these were often reproductions of the Saturday Evening Post. I believe I was subconsciously expecting the originals to be marginally sepia and around 40 cms tall. I could not have been more wrong.

The first painting you see is at least 80cm high and is entitled ‘The Volunteer Fireman’. A portrayal of a man and boy running to quench a fire which is out of shot. Typically Rockwell in composition, exhibiting his genius in telling a huge story in a single scene. Why do we know the boy is his son and not just a passer by? That just has to be the family dog and not a stray, no doubt about it. The father is rushing to put the fire out and his son is rushing to see a bigger fire.
The colours are brilliant and vibrant. Rockwell has used the trick of putting the opposite shades of red and green together so they excite and rebound against each other. The blaze is massive and very hot. A fantastic piece of illustration.

An illustrator has no time for the viewers to ponder the image, quietly stroking their chins as one would in a gallery. It has to shout its message over the din and jostle of the magazine rack and ‘The Volunteer Fireman’ exhibits this skill perfectly and is an object lesson for anyone wishing to a pursue a career in illustration.

All through the exhibition you are treated to a master of brushwork and the expressive skill of characterisation. Particular favourites of mine being:

The politics
I don’t think you can go to a Norman Rockwell exhibition without looking at the political context. If he just stuck to Mark Twain books then politics would not be an issue. He did however work for media publications.

It needs to be emphasized that the Saturday Evening Post was not a current affairs magazine featuring the latest news and politics. It was essentially a showcase for short stories, hence the Rockwell covers. Over the years it featured authors such as::

That said, I did my best to look through all 323 covers of the Saturday Evening Post (I may be wrong as there were so many) and it appears that The Post missed out the entire Vietnam War where the USA endured 58,000 dead. And the only non white person I saw was an African American as a railway porter overloaded with suitcases.

For me, the illustrations individually are delicious although what they leave out the as a 47 year body of work feels rather disturbing.

This exhibition gives a fascinating visual touchstone on how certain elements of America still wants to see itself, what it believes in and consequently what it is prepared to defend. This is deep within the conservative politics of  The USA.

“We’re going to keep trying to strengthen the American family. To make them more like the Waltons and less like the Simpsons.”
George H. W. Bush

But is it real? Was it ever real? Of course the answer is no. And that is how Rockwell should be viewed. An illustrator painting unreality.

A footnote on Norman

I have been an illustrator myself and as I wrote this I couldn’t help thinking that if my editor scythed out vast swathes of history I don’t think I could have carried on. Digging a little deeper, I found that there was a bit more to Norman that meets the eye so to speak. He had a life long struggle with depression and may have been bipolar (manic depressive) He was treated for depression by renowned analyst Erik Erikson, who said that “He painted his happiness, but did not live it”. Alongside this, his wife drank herself to death. Hardly ‘Rockwellian’!

There may be a small clue to this in the shape of a painting which was produced for an advert but never used. A sullen and isolated little girl staring out at us surrounded by adults set in a dark background looking at her intently. 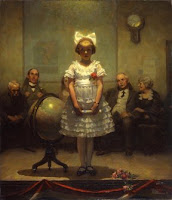 This surely could only be suitable for advertising the NSPCC! Truly disturbing.

Maybe his work was his escape? He painted a bright, happy optimistic world for decades to chase away the demons of real living? An escapist? I don’t know.

To summarise
I do not, like many totally blame Rockwell for an airbrushing of reality worthy of Stalin himself. I remind myself that he was not an artist. He was an illustrator working for a ‘Today’s news is tomorrow’s apple pie paper’ short stories magazine which was in a sales scrap just like any other publication. He had to deliver exactly what was needed for 47 years within briefs so tight that they would make Tom Jones squint. That is how he needs to be seen and he did it brilliantly.